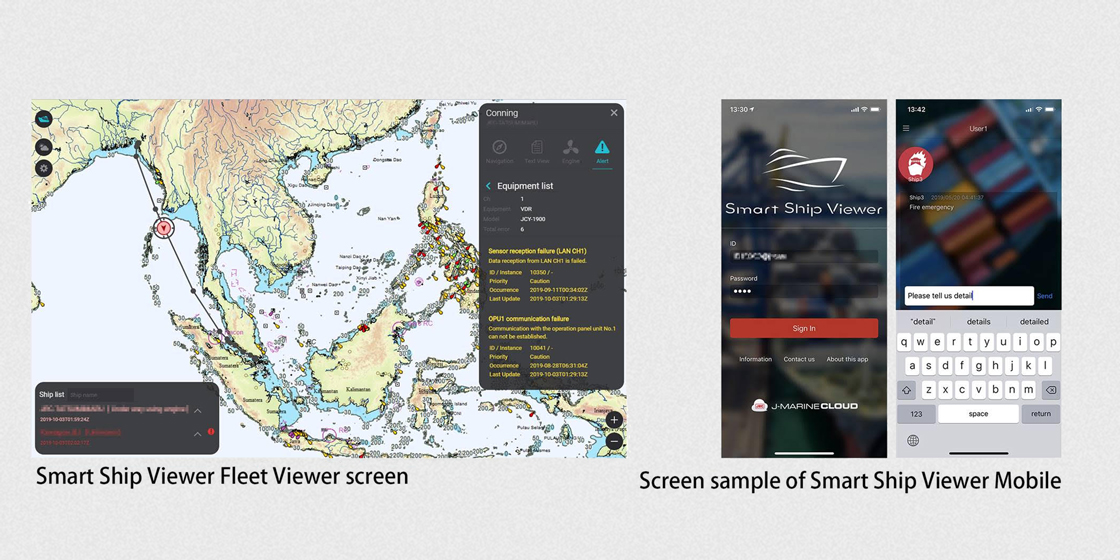 Japan Radio Co., Ltd. has commenced, from April 2019, the ship-land information service that uses JRC’s VDR/S-VDR (JCY-1900/1950)*1 and J-Marine NeCST*2 as the solution for allowing the checking of the navigation statuses of the ships that are managed by the company, both from the company office and with the sharing of the information among ships as well.

This service enables checking at any time the status of managed ships from the management company office by installing our equipment in ships with high-speed satellite communication equipment such as FX*3 installed. The service thereby contributes to economical, safe, and secure navigation management.

The details of the information service are as follows.

1) Ship monitoring service (Fleet Viewer)
This ship monitoring service (*) allows you to browse the movements of managed ships and the status of JRC equipment from the management company office. This service also contributes to efficient navigation management and avoidance of unexpected equipment problems. To use this service, a combination of JRC’s VDR and J-Marine NeCST is fundamentally recommended as the configuration. However, the service is also partially available with JRC’s VDR only.

(*) The information that can be monitored varies according to the configuration of the equipment that are installed.

2) VDR recorded data downloading service (Ship Management)
This service allows you to obtain data that is stored in JRC’s VDR/S-VDR (ship speed, steering, engine information, etc.), which is installed in the ship, from the land via J-Marine Cloud. The data that is obtained can be reproduced by using the VDR Real Time Monitor software (**). This service contributes to confirmation of navigation status of the ships and checking of the condition of any accident quickly without the need for any intervention of the crew upon occurrence of the accident. To use this service, JRC’s VDR is required.

(**) Dedicated software of JRC, attached to VDR/S-VDR as the standard.

J-Marine NeCST is equipped with a function (***) for promptly sharing information with the management company or shipping company on the land in an emergency situation. With the chart and checklist that are shared between the ship and the land, as well as the chat function, the service supports quick decision making such as a drafting of a contingency plan. To use this service, J-Marine NeCST is required.
(***) Dedicated software NeCST Manager is required on the land side. NeCST Manager must be installed in a JRD-recommended computer.

*1 : VDR (Voyage Data Recorder), which is referred to as a ship’s “black box,” recovers recorded data from the ship upon the occurrence of a marine accident such as collision or sinking, allowing the obtaining of information including ship speed, steering, engine information, conversations in the bridge, VHF communication contents, and radar images. The information is used for investigation on the cause of the accident. S-VDR (Simplified-VDR) is available for cargo ships that have been built in 2002 or earlier and applies more relaxed requirements for data collection and recording capsule tests in comparison with those of VDR.

*2 : J-Marine NeCST (Navigational electronic Conning Station Table) is a navigation support tool that allows formulation of an efficient chart by displaying hand-written information and meteorological information by overlaying them. It digitizes various types of information relating to navigation to enable the sharing of the information between ships or between the ship and the office on the land.

*3 : FX (Fleet Express) is a high-speed satellite communication system that is provided by Inmarsat and is a combination of FBB (Fleet BroadBand) and GX (Global Express).

JRC will continue to realize solutions that contribute to a safer and more efficient navigation environment.

We use cookies to ensure that we give you the best experience on our website. If you continue to use this site we will assume that you are happy with it.OKTerms of Use